A few weeks ago I read Stephen King’s book on writing called, um, ‘On Writing

’. If you haven’t read it, and you have any kind of literary aspirations, I thoroughly recommend you give it a go. Even if you don’t, as a biography of a successful writer’s career, and as an insight into how he does what he does, it’s well worth looking into.

I’d never read any Stephen King novels before reading that one, mainly because my entire understanding of his work until now consisted of just three pieces of information.

But on the strength of reading the awesome On Writing I decided to give some of his work a go. 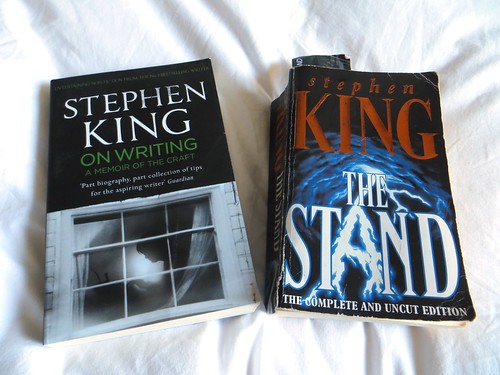 The old me would me would have felt the need to start at the beginning, with Carrie, because reading people’s work in the order it was published somehow used to seem so important. The new me, who read all The Watch novels by Terry Pratchett

first before going back and starting on the rest (and is very happy he did so) decided to start at the very top with what many consider to be his finest work; the 1421 page, complete and unabridged version of ‘The Stand

I bought an old copy from Amazon for 1p, plus £2:80 postage and packing* (I was interested in seeing what it was like, but not that interested), and so far – 444 pages in – I’m enjoying it. Unsurprisingly, considering the length, it rambles a little, and there are an awful lot of characters to keep track of, but it’s well written, the idea’s really interesting, and I’m looking forward to seeing how it will play out.

* The old library copy I’d bought had an anti-theft sticker inside the front cover, a fact which caused me merry hell when I went shopping the other day – with alarms going off all the time, many a suspicious look and one apologetic bag search – until I finally figured out what was going on and ripped it out, taking part of the front cover with it.

For those of you that don’t know, the basic storyline (in a nutshell) concerns a genetically engineered super flu virus that escapes the lab and kills about 97% of the world’s population, and what the remaining 3% do afterwards to survive. It’s an interesting proposition which brings me, in a very roundabout way, to the actual point of this post.

I just read a chapter on the wave of natural selection that would happen if just such a disaster did occur. After the disease had done it’s thing some people, unused to and unprepared for a world without safety and technology, would die off pretty quickly from their own greed, ignorance or stupidity. We are told about a bunch of different people, and the tragic/stupid ways in which they meet their demise, and that made me wonder about the so called ‘sanctity of life’. We’re often told that all life is precious, that dying is bad and everyone is important. But is it true?

There are 7 billion people in the world; 7 billion! Let’s assume that most of them are either making the world a better place, or at the very least not actively trying to mess things up for the rest of us. Statistically speaking, there must be at least some people who are actually making the world a worse place to be. Even if it was just one tenth of one percent, that’s still 7 million people we’d be better off without. That’s a lot. I mean, that’s 7 million deaths that could make the world a better place. Faced with an idea like that it brings the whole sanctity of life thing into question don’t you think? It does for me anyway. 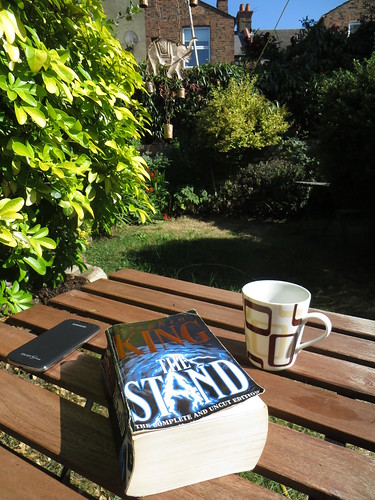 That was where my mind wandered to on this sunny Saturday morn (NB: I feel ok in having thoughts like this because I’m not actually proposing we go out and start killing people!), when my mobile phone went *ding ding* and I got an e-mail. Train of thought ended. Something new had come along to distract my brain, abstract my thought pattern, and detract from my creative mental ramblings. And that’s what this post is really about.

We’ve made distracting ourselves into a full time thing, so much so that the distractions themselves fight for our attention. Message alerts and notifications want us to stop our lives and take notice of what our friends are getting up to on Facebook or Instagram, and we let them. No wonder we have short attention spans.

But we do it to ourselves too. Whilst I was writing this I heard my friend get up and go in the kitchen. She’s been away for a week and got back late last night, after I’d gone to bed. I felt a compunction to go say hello, see how she was, see how her trip went, and it actually took some effort on my part to stay focused on what I was doing so that it might actually get it finished.

I don’t know if we’d be better off if there were less people in the world, but I do know we’d be better off spiritually speaking if we turned our phones and our brains off once in a while and just stayed in one place – both physically and mentally – and did just one thing at a time. I suspect we’d be a lot happier, and we’d make more of this life that we’re all so keen on preserving.